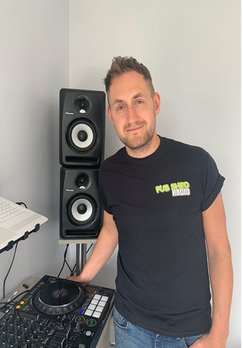 Danny B had his first taste of Djing at bars back in 2008 whilst working a season abroad in Aiya Napa. On return to the uk he quickly made a mark on the local scene playing bars and clubs in both his hometown of Walsall and the second city Birmingham. Since then he’s played alongside the likes of Judge Jules, DJ Ez and many more. In recent years he’s moved away from the club scene and towards private functions and events but still loves the buzz of playing on the big stage!

Danny joined PSR back in April following a series of Facebook lockdown live streams with the outlook of entertaining friends and beyond. These caught the attention of the local Soul Guerilla who invited him on for a guest show which then led to him joining the station. Danny now fronts the 3 hour Friday night ShedKandi mix show from 6-9pm along with weekly slots on Wednesday and Sunday evenings. Although his true love is for House and Dance music you’ll hear a wide sweeping variety of all genres across his PSR shows.